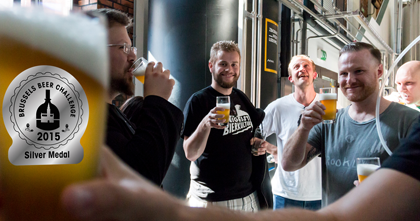 As the Brussels Beer Challenge is one of the leading and globally recognised professional beer competitions, we have decided to take it. With no previous experience in this type of competition, we have certainly jumped in at the dead end. Considered one of beer homelands, Belgium is also one of the most varied and long-established beer markets. This is the reason why the competition takes place among the most renowned breweries. This year, the competition has been entered by the stunning number of 110 beers from 30 countries.

The beers have been evaluated by 79 international connoisseurs for their colour, taste, aroma and style in accordance with specific style requirements.

For the purpose of tastings, all beers have been grouped according to styles. Our “beer geek” SALAMANDER Hoppy Violet Potato Lager has won a silver medal and has been named the best beer in the American-style Pilsner category. As a lager category, it presents a technical challenge, specifically for such a young brewery as ours. What is more, the “American” in the category’s name points to the recently hippest approach to brewing. We are pleased with the fact that the beer brewed for such a one-of-its-kind event as Beer Geek Madness may win awards at such a prestigious competition.

Here is a video coverage of the Wrocław premiere of SALAMANDER Hoppy Violet Potato Lager:

The lager captures the essence of the German brewing industry but in a craft version. Mashed with violet potatoes, which bring out the richness of German and American hop varieties, the beer is a refreshing and unconventional lager. It is brewed by Beergeeks for Beergeeks! The beer has high drinkability. The taste is leaning towards noble, herbal and resinous bitterness. The aroma combines traditional hoppy, grassy and herbal tones that the best German pils beers are known for and fruity/citric tones typical for new-wave American beers. It’s the Polish beer awarded at 2015 Brussels Beer Challenge 2015!

The mission of the Brussels Beer Challenge 2015 is to promote high quality beers and encourage healthy competition among breweries. The organizers believe that as the market is increasingly geared towards specific style beers, loyalty amongst beer lovers and expansion into new markets can be achieved only by high quality products. Winning an award at the Brussels Beer Challenge certainly provides recognition for the Brewery’s achievements whereas the official medal awarded by a group of renowned experts opens the gates to new markets. We couldn’t be happier!

The competition took place at the Elzenveld Hotel in Antwerp between 5 and 7 November. The awards were presented on a one day following the competition at a 182-year-old City Brewery De Koninck. More details about the competition and a list of the international connoisseurs available at: