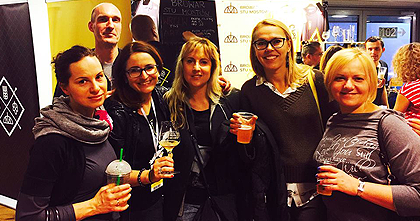 Thanks Warsaw. Visit us in WRCLW!

From the perspective of the Wrocław-based Good Beer Festival, its Warsaw counterpart is relatively small in scale but nonetheless impressive in terms of ambience. It’s already been the second edition of the event, which is to take place twice a year. The April’s edition attracted as much as 15 thousand participants, similarly to the fall edition.

We get the impression that everyone who lives in Warsaw but whose heart leaps for Wrocław visited us this weekend. Once again, we built a bridge between the two cities by bringing over all our brands: WRCLW Pils and Roggen, which seems to be Warsaw’s favourite; SALAMANDER AIPA; Pale Ale; and the returning Wheat Porter. We also offered Hoppy Violet Potato Lager brewed on the occasion of the Beer Geek Madness festival. The beer that made its debut was ART White IPA produced in cooperation with the Wrocław-based cabaret Neo-Nówka. We also served two kegs of ART Nigredo Chocolate Mint Foreign Extra Stout saved specifically for this event. No surprise, they got sold out on the spot.

The festival opened on Thursday with excellent speeches by Bartek Nowak, Małe Piwko, and Michał Janiak, Małe Piwo, whereas on Friday night Tomasz Kopyra, Michał Kopik and Jakub Niemiec hosted a heated discussion about “Sponsored blog reviews.” On Saturday Michał “Docent” Maranda, PolskieMinibrowary.pl, presented the latest news on the “Polish craft scene” pointing out the dynamically growing number of breweries. Interestingly enough, a craft brewery from Wrocław made its debut during the festival, namely: Warsztat Piwowarski, a project of Marusia, Agnieszka Wolczaska-Prasolik. Welcome to our craft community! Let’s meet in Poznań at the Poznań Beer Trade and on the Wrocław Beer Trail. More information coming soon.

We’d like to thank all our guests for visiting us and creating a welcoming atmosphere. Your opinions give us a lot of satisfaction, as do sales. It hasn’t quite been a year yet and we have succeeded in attracting an impressive number of loyal fans. What we’ve been surprised with is the fact that our supporters from Warsaw already have their favourite styles, with Roggenbier being the most praised. As it has been said before, it is “the rye beer that will attract crowds.” Greetings from WRCLW! It’s good to be back home.