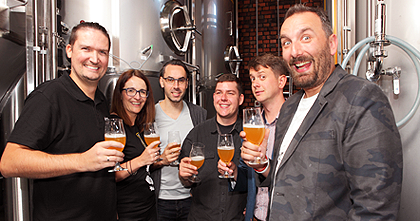 ART debut and before party of the jubilee tour

We’ve brewed the beer together under the ART brand, which promotes creative cooperation. We’ve come together to show that beer is much more than just beverage. First and foremost, it is the symbol of creativity across disciplines. The collaboration also points out differences between commercial and craft breweries. While it wouldn’t be possible to organize such a project in a huge brewery, our staff and our friends from the Neo-Nówka cabaret have come together to create brand new beer. The outcome of our cooperation is outstanding!

As we all come from Wrocław, the craft’s capital, we’ve decided to join forces and start collaboration. The outcome couldn’t be better. Join us for the beer’s premiere and before party of the tour around Poland. The beer has been designed as the cabaret’s present for their fans on the occasion of their jubilee tour. The 15th anniversary of the cabaret will be celebrated with 15% blg beer: one percent for each year of the cabaret’s performances.

The collaboratively brewed beer aims to: show that the craft sector has been thriving; that there is an alternative to commercial beers; that beer actually has flavour if not a wide range of flavours. The project’s mission is to show that craft brewing goes beyond limits.

“It feels great to create something from scratch. I had no idea that beer brewing is such a creative process offering a wide range of possibilities” – said Michał Gawliński from the Neo- Nówka cabaret. “We’ll show that beer has flavours. Taste buds get used to good flavours so we’ve got a mission to carry out. We’d like to show that Poles hold a potential. With its fantastic beers, Browar Stu Mostów serves as the best example. It is not surprising that we’ve brewed our beer there” – said Radek Bielecki. His idea is “to encourage people to taste craft beer and make them think about who and why created such a good thing.”

Cooperating with Neo-Nówka, we’ve noticed how many things we have in common. First, we all come from Wrocław or its surroundings. Wrocław is where we have set up the brewery while Neo-Nówka is also very much of a Wrocław-based cabaret. Second, creativity. The performers are artists while brew masters are authors of original recipes for genuine beers. Thirdly, passion and commitment. We’d like to take this opportunity to congratulate Neo- Nówka. Let’s meet soon at the National Music Forum and after party at the Kontynuacja pub.

We hope that the beer brewed in collaboration with the cabaret reaches the widest audience possible. The tour covering 15 cities in Poland will definitely promote craft beer and craft production, in general. The beer will be served by the most prestigious multitaps following the performance of the cabaret. More information on the events, gadgets and tickets available at www.sklep.neonowka.pl

Our cooperation has opened up a chance to promote our brewery, craft beer production and Wrocław itself. Keep your fingers crossed. Stay tuned!