The Bridge between WRCW and KRK

Whale of a time at Beerweek Festival in Kraków 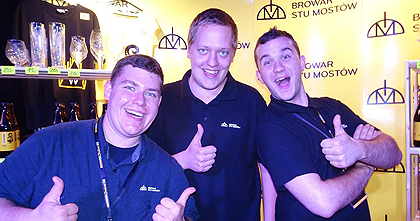 A rainy weekend in KRK

Bad weather couldn’t spoil the fun we had in Kraków. In spite of the downpour on Friday and Saturday, beer lovers had a whale of a time at the 2nd edition of the Beerweek Festival in Kraków. Over 100 taps, over 200 beers including several debuts.

What Beerweek also offers is the educational value. Similarly to the previous edition, there have been contests, talks and speeches given by renowned Polish specialists. Tomasz Kopyra led tastings while Michał Docent Maranda presented the “History of Polish Craft.” To watch his full account of the Festival go to: http://polskieminibrowary.pl/2015/09/29/beerweek-festival-02-czyli-pozegnanie-z-fabryka/

As the tradition has it, the event will be crowned by a contest for the best beer of the festival. Well-experienced beer lovers and beer enthusiasts who have just discovered craft beer are going to cast their votes. We have served WRCLW Roggen, the beer that has just received the title of the 2015 Lower Silesia Product of the Year; SALAMANDER AIPA, Pale Ale; SALAMANDER Hoppy Violet Potato Lager, brewed for the occasion of Beer Geek Madness; and the returning Wheat Porter that has won over the tastes of Kraków inhabitants. This time the grit of Wheat Porter has been changed a bit to give the beer less roasted flavour to the benefit of a higher dose of chocoalte wheat malt. There is even more freshly baked oat flakes accounting for the beer’s smoothness and aroma of oatmeal cookies. Thanks to low concentration, the beer is exceptionally velvety while its subtle acidity brings out its complex flavour. Perfectly balanced, the beer wins over the hearts of many, even enthusiasts of the lighter side of the beer world.