German craft meets at the BGM3 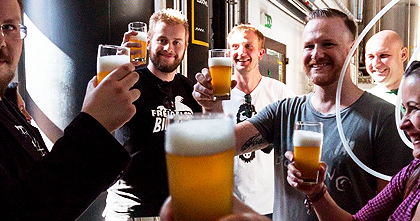 The Beer Geek Madness festival has hosted leading craft breweries from Germany and witnessed the debut of SALAMANDER Hoppy Violet Potato Lager. This week has been filled with opportunities to get to know the brewing industry of our neighbours and the role it played in increasing the brewing standards in WRCLW.

SALAMANDER Hoppy Violet Potato Lager. Lager, or the essence of the German brewing industry, in its craft version. The hops are a mixture of the German tradition: the bitter Magnum variety, aromatic Hallertauer Hersbrucker and new-wave German Mandarina Bavaria (all of these varieties are grown in Germany) and American varieties: Chinook and CitraTM. The beer is mashed with violet potatoes called the truffle ones which brings out the richness of German and American hop varieties. It’s a refreshing and unconventional lager.

SALAMANDER is a brand created to broaden our horizons and promote meetings over beer. Visit us at the BGM or join the meeting with the German craft industry on Długosza Street.

After a short break, the classics: Schonramer – Dunkel, Helles and Weissbier as well as the new-wave German beers: Camba and German IPA are back on the taps. Not to mention our Roggenbier and Pils, the classic representative of the German Pils. All spiced with the most exquisite German menu: Semmelknödel in chanterelle sauce served with egg and herbal bread balls, breaded pork chops served with noodles, or Leberknödel liver balls served in broth.

We’d like to take this opportunity to thank everyone for visiting us at Długosza Street. Everyone left impressed with our Brewery, technical capacities, automatisation level and our attitude. Every meeting brings all of us closer together.