Our Berlin Week goes on

Great promotion of WRCLW in Berlin and the first Tap Takeover! 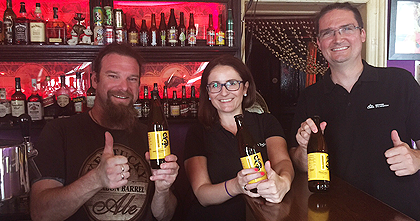 Our goal is to build a beer export bridge between Wrocław and Berlin, another European beer capital aside Prague, Czech Republic. Browar Stu Mostów beers are going to take over taps of Hopfenreich Craft Beer Bar Berlin. We are joining WRCLW and BRLN in the most enjoyable way!

The tap takeover starts on Monday at 6:30 p.m. We have brought five beers for the occasion: Salamander AIPA, Pale Ale, American Wheat, WRCLW Roggenbier and WRCLW Pils, the classic version of the German pils. Come and have the first sip! Cheers! Prost! Daumen hoch!

We have started our visit at the Monterey Bar owned by Adrian and Vanessa Sampson, two Australians who have joined their two big passions: craft & heavy metal music from the 1960s and 1970s. Mind the Black Sabbath on the walls. It is where we have met the Berlin- based craft breweries: Privatbrauerei Am Rollberg and Flying Turtle. What we share is respect for tradition and desire to experiment.

Hopfenreich Craft Beer Bar Berlin is something totally different. This bar is so cosmopolitan that you can encounter representatives of the entire world both on shelves and among customers. The place mirrors the 180 nationalities living in Berlin including a slight majority of our friends from Central Europe: from Szczecin to Budapest.

The welcome was very cordial. We have met a lot of beer lovers: brewmasters, pub managers, and guests aware of the long-established tradition of beer brewing in Lower Silesia. Some of them have already visited our brewery.

The Polish craft is of an interest of IPA Bar and Szimpla, well-known treasure hunters, Hopfen & Malz, promoter of German, Belgian and British craft, and Berlin Bier Shop, famous for its wide variety of beers. It is said to be the only place in Berlin where the best beers from well-established European and American breweries are available. Regards to Kaschk Craft Beer Bar!

We have also had the pleasure to meet representatives of Bierlieb and Biererei. We’ll do our best to meet again. The most popular beers have been: SALAMANDER Pale Ale, AIPA, promoted by our hosts, and WRCLW Roggen. Our brewery has been very well received. Everybody hopes our beers will be available in Berlin pubs for good. We also hope for the best. The stylishness of our beers has been appreciated.

While in Berlin, we have been awed by extraordinary action “93 Straßenschilder” reflecting on the condition of Polish-German relations. As part of the action, 93 streets of the Friedrichshain district in East Berlin have been decorated with thought-provoking pink colour. Street name signs that derive from Polish towns have been contoured with a pink map of Poland. The aim of the action is to encourage local citizens to think about the people living in Polish towns and common history that they share with the Germans. It seems that the timing of our visit to Berlin couldn’t be better. 🙂

We have shared the stories about the success of craft beer in WRCLW, over 50 places where our beer is available (it is quite an outcome taking into account the scale) and people building the bridge linking Polish and German craft. We have invited key players from the German craft industry to visit WRCLW in order for them to learn more about our brewing traditions and the contribution of the Germans, particularly Bavarians, to improving the quality of beer brewed in WRCLW.

Let’s all meet at the 3rd edition of BEER GEEK MADNESS in WRCLW!