The Product of the Year 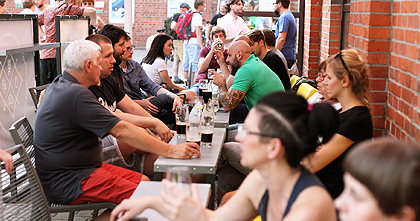 The 2015 Lower Silesia Product Contest is under way. The readers of Gazeta Wrocławska ( Wrocław-based daily) and the website naszemiasto.pl are voting for the best product. We’re doing really good, but the closer the deadline, the more support we need 🙂 We ask for your votes! We aim for the craft beer to rank very high in the competition. And there are loads of reasons for that.

We are asking for those votes! And we invite you for the first sip!

Since the opening of the Brewery in December 2014 we have brewed 11 beers. From the very beginning, it is a combination of two attitudes to modern brewery – rediscovering the tradition and following the dynamic beer revolution. We go for styles considerably differing from one another to demonstrate the richness of the beer world. We use great amounts of the highest quality special malts, hops, yeast and spices.

Under the WRCLW brand, we have Pils and Roggen. We also WRCLW Dunkelweizen – the official Festival Beer of the 6th Wrocław Good Beer Festival. The WRCLW brand aims to BOOT our identity and taste awareness. It was the first and is the most important tool in the beer education, we have no doubts about that. in the name there are only consonants, in the product only those ingredients which have been used in the beer production for centuries. It is and will be classic in new arrangements.

Under the SALAMANEDR brand we brewed 5 beers: Pale Ale, AIPA, Wheat Strong Witbier and American Wheat.  It is the essence of the beer revolution. The brand we created to broaden our minds and endorse the refreshing power of meetings.

The third beer brand of the 100 Bridges Brewery is ART. It made a fancy debut – with the beer Doppel Weizenbock German IPA. Rare, challenging beer created in cooperation with the Bavarian Brewery Camba (the premiere on 26.02). Then we brewed Chocolate Mint Foreign Extra Stout, beer with the addition of roasted cacao beans and fresh mint chocolate. Brewed in cooperation with the brewers from three other Polish craft breweries, specially brewed for the alchemic Beer Geek Madness (11.04). The third one is ART Coffee Milk Dark Lager – the result of our cooperation with the Wrocław coffee lovers and Czarny Deszcz (16.07). The ART brand stands for creative cooperation of gifted and open for new experiences people. We bridge the gaps between people and between beer styles. This type of cooperation while devising a beer and then the recipe is something very characteristic of craft brewery.

We realise that, but also the fact that pretty soon we will witness a similar cooperation in adverts of beer produced by corporations. We have to bring up those issues, we have to explain and educate. People don’t realize the fact that while devising new recipes we aim to manufacture the highest quality beer. It is the attitude typical of craftmen. Without any unnecessary acceleration of the production process. Always with the use of the highest quality products. This ranking is a great opportunity to highlight the differences.

We will all benefit from the work of Gazeta Wrocławska journalists. Regardless of the fact if they write about Maciejowy Sad juices, gingerbreads from Oleśnicy, Łomnicki cheeses or Milicki carp. We take advantage of the opportunity and greet our friends and suppliers. But if want them to write about craft brewery – we need your help.

We ask for your votes!

You can vote in 3 ways. At http://dolnoslaskie.naszemiasto.pl/plebiscyt/karta/browar- stumostow,28527,1416719,t,id,kid.html– at the website and via Facebook. It can be 2independent votes daily by the end of August. If someone wishes to help out, but doesn’t want to waste time clicking, they can send a text message: