The Organisers of the Doc Film Festival
OKIEM MŁODYCH 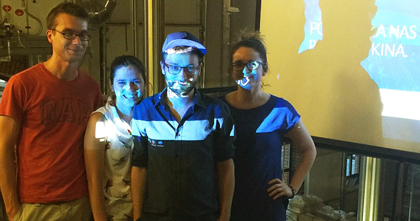 Lech Moliński at the 100 Bridges Brewery

The organisers of the 7th edition of the Documentary Film Festival OKIEM MŁODYCH. The magic of the cinema is overpowering. And the documentary film is characterized by a fresh and full of insight look at the surrounding reality. In Długosza Street we held the film screenings of the last-year winners of “Okiem Młodych”. The viewers were left focused, amused, stunned and full of reflections. The films by professional, film school students, but also by people with no film education. Lech Moliński provided us with some introduction – the artistic director of the Festival, the vice- president of the Wrocław Film Foundation, journalist and film critic. For us, he is first of all a very open-minded person, a good listener and knowing how to share his experiences. A splendid culture animator and one of the most creative people in WRCLW.

The first film we watched was ”I’ll Call You When I Get There”. An amusing, very unconventional, even brilliant picture of the family relationships by Małgorzata Goliszewska. It received the special Festival jury award „for the original idea, consistent film form and telling an important story about real-life issues, rendered with a stunning sense of humour”.

Maciej Buchwald’s documentary titled „Love Horoscope” was perceived differently 🙂 strong aroma of intrigue, a bitter sweet taste, but honest and complete in terms of composition. It won the International Film School Competition award – „for a warm story about love between a mother and a son, a man loving eighty women, craftfully directed and naturally witty”.

The third movie was the winner of the main prize „Złote Oko” („ Golden Eye”). The film directed by Jagoda Szelc, the inhabitant of Wrocław – „Punkt wyjścia” (“ The Starting Point). A dynamic, colourful, extremely insightful film about „a passion which is a source of joy, but also a drug”. The Festival jury justified their verdict with the words. „For the choice of the fascinating, unorthodox character, and an amiguous film, with a hidden secret, which dives deeply into the man’s life and passion, pursuit of freedom and a peculiar addiction which the serach for extreme experiences can turn into”.

It was a good starting point for us as well. We watched the winners of the last-year edition of the Festival Okiem Młodych. It was an occasion to see how interesting and full of emotions a documentary can be. We became a part of the meeting platform for the lovers of the cinema and documentaries created by Lech Moliński, Świdnica Culture Centre and the Wrocław Film Foundation. We keep our fingers crossed for this year’s edition.

There are lots of similarities to craft brewing. Creativity, deep emotional involvement of the creator, authenticity, unpretentiousness, the range of emotions and tastes. Documentary films just like beer have a taste, something can suit your taste or not, because they aren’t created to cater for everyone’s taste. They are a form of expressing ourselves and are supposed to evoke emotions. The consumption is viewed as an experience and an excuse for conversations.

Craft is perceived as a part of the creative capital of WRCLW and Poland. Our guests are open-minded people who prefer to take a wider perspective of things, just like Lech, they think in an interdisciplinary way and know how to cooperate. Together we endorse those skills. The beer of the evening was the ART label – a symbol of us, brewers, cooperating creatively.

We cordially invite you to visit our unique Brewery located in the former cinema. The location we chose on purpose. So that we could demonstrate comfortly the differences between the reviving craft brewing and the mass production, most often global one. Details at  http://100mostow.pl/zwiedzanie/