The Day of Beer and Brewers 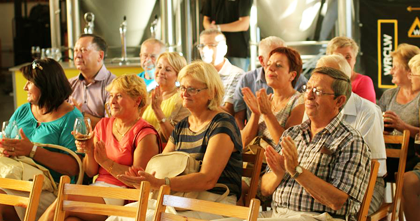 The Day of Beer and Brewers in WRCLW

It was Christmas in the middle of summer. Our first celebration taking place in the functioning Brewery. It was an occasion to get together with brewers and all the bar tending staff, to taste beers brewed in the first after the war, classic urban brewery in WRCLW. Thank you for the wishes and an amazing meeting.

We invited people professionally involved in beer production. We had the pleasure of hosting brewers from all the former Wroclaw breweries, as well as the guests from the Nutrition Faculty of the Natural Sciences University in Wroclaw, together with professor Joanna Kawa-Rygielska, the Head of the Fermentation Technology Department.

It was an important day for WRCLW which is “slowly growing into the Fine Beer Capital. Even nowadays the largest number of craft breweries are set up here as compared with the whole country. We host the oldest and the biggest Beer Festival in Poland, as well as the finest beer event – Beer Geek Madness”, according to smakiwroclawia.pl.

It was an official 3. Reunion of the Workers of former Wrocław Breweries. The first, historic meeting was held on August 5 last year, 10 years after closing down the Piastowski Breweries. In the 100 Bridges Brewery the employees of all the departments of Piast, Zakrzów and Bourgeois Breweries as well as Strzegom Malt Plant got together. The second meeting took place on March 19 to mark the Craft Day. The meeting was held with a view to fostering ties and remembering the long history of Wrocław Breweries. The fact that throughout centuries beer has always been present in the everyday life of Wrocław dwellers. The authors of the book “Beer in Wrocław – from the middle ages to contemporary times” were our special guests, together with Halina Okólska from the History Museum, the Department of the Wrocław Museum. The second edition of this iconic book, which was released in June this year, already mentions the first in years classic craft brewery – The 100 Bridges Brewery.

Maciej Łagiewski, the director of the City Museum in Wrocław, when he was opening the new exhibition on the history of the golden drink in Wrocław, said: Everyone keeps asking me: What was Wrocław renown for? Norymberg has sausages and wine, Poznań – Marcin croissants and the staple product of Wrocław was beer. The celebration of the Beer and Brewer Day is an occasion to actively revive this symbol.

We are thrilled with the achievements of the whole Wrocław craft beer environment. We are happy that all we have done since launching our brewery is appreciated by the people around. Many thanks for an amazing meeting and the wishes to stay consistent.