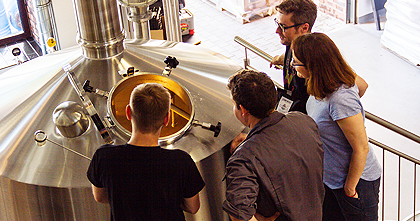 We have scheduled captivating beer tasting. In July, taps 8-10 will offer beers from London breweries FOURPURE, ORBIT BEERS as well as The KERNEL, including their widely-renowned Black IPA – intensely dark, slightly opaque, strongly hopped beers from the family of India Pale Ale.

Dutch brewery JOPEN, including Hoppenbier – double hopped top-fermented beer, with dark orange tint which caters for us a dose of citrus and hop aromas, together with yeast hints typical of this beer’s style.

Bavarian CAMBA: Wilderer Weisse Dunkel – dark version of classical weizen, Imperial Black IPA – India Pale Ale in the dark and imperial version. And for the dessert Hop Gun – brown ale, moderately saturated, amber beer, its aroma bearing traces of caramel, raisins and mild citrus. It tastes of dried fruit, caramel, herbs and citrus fruits. It’s a myth that dark beers are high in calories, fattening, sleep-inducing, strong and better suited for winter. We will demonstrate that dark beers can be very diversified, display a light amber, red, brown and as black as coffee tint.
Feel invited for the first sip!

The highlight of the month will be an astounding Wrocław collaboration. Together with Czarnym Deszcze, we have created an ART no one has witnessed in WRCLW so far. It will be a beer of low fermentation where we added splendid „Peru-Elmer Pena” coffee at two stages from the Wrocław brand of Czarny Deszcz. A small portion of coffee was added at the end of the hop cooking process, but a considerable majority was incorporated in the ageing of beer, where, by applying the “cold brew” method of coffee brewing, we have gained a unique aroma and taste of superb coffee – in beer!

Additionally, while brewing we added some lactose – milk sugar which doesn’t undergo fermentation with the use of beer yeast, which contributes to a deeper flavour in a final product. Using the lower fermentation yeast has led to the aroma and taste of coffee being even more savoury, and the beer itself bears the freshness typical of lagers.

Feel invited for the first sip and tasting the ideal blending of superb coffee and splendid beer!

The ART. brand embraces creative cooperation. The beer was created by gifted people, open for the exchange of ideas. This beer is addressed to creative people, to people open to new experiences. It is a good illustration of craft beer and what we can achieve together we we work towards a common goal bringing in our talents and abilities. The premiere will connect the lovers of craft beer and the lovers of brewing real coffee.