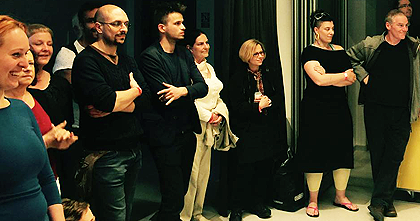 “THE BRIDGES project tells the story of Wrocław. It has also given a chance to tell our own story to Wrocław, Poland, Europe and the whole world,” said Chris Baldwin, a curator of the ECC 2016 and art director of the BRIDGES project. Artists, amateurs, performers and city dwellers told their stories on one specific day participating in the BRIDGES project. Congratulations. It was a fantastic weekend! A great potential has been released.

The gates to the One Hundred Bridges Brewery are open to everybody inspired by the history of WRCLW, in search of their identity, focused on collaboration and with an optimistic attitude. Creative Wrocław is Happy! 😉

We had a lot of fun at the official afterparty of the BRIDGES project, which was a closed event for organizers and performers. The atmosphere was cosy and cheerful. The new SALAMANDER brewed for the finale of the BRIDGES project and WRCLW Dunkelweizen, the official beer of the 6th edition of the Good Beer Festival, were the official beers of the party. SALAMANDER – the brand created to enjoy life and broaden horizons; a symbol of openness and exchange. WRCLW – the brand that strengthens our identity; a classic in refreshed variants.

As part of the BRIDGES project, the 27 bridges and footbridges hosted artistic events including concerts, performances and radio dramas which were mostly organized by young city dwellers with the help from professional artists. About two thousand people participated in the project.

We were moved by the events on the Peace Bridge, Zwierzyniecki Bridge and General Sikorski Bridge, which hosted a performance about people living in Wrocław and San Sebastian.

Students of the Fine Arts Academy created a replica of the Zwierzyniecki Bridge that moved around the city on people’s shoulders. The Peace Bridge was turned into an exhibition pavilion whose specific segments corresponded to the times of Festung Breslau when the bridge was ornamented with metal arches. The pavilion hosted large-format photographs of inhabitants of Wrocław featuring their different life stages. It opened the weekend’s celebration that started on Wednesday.

The BRIDGES project has announced Wrocław as the 2016 European Capital of Culture along with San Sebastian in Spain. We’ll join forces to build this bridge!