The meeting of brewmasters and homebrewers 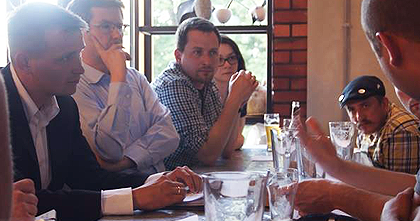 We have had the pleasure to host brewmasters and homebrewers from the Lower Silesia region to discuss the issue of how the government could support passions of their citizens. We concluded that the government should support the craft brewing industry as part of a broader policy. One of the barriers for the industry is interpreting legal provisions. The fact is that every official may interpret them differently, which means that the industry is dependent on the official’s discretion and goodwill. It is to the best interest of the industry not look for divisions into sectors (mini, micro, restaurant, etc.) but focus on the philosophy that unites us and differentiates from the commercial sector. We must remember that together we make a difference for Polish beer lovers.

The participants into the meeting included such breweries as Probus, Folwark Piwny and Złoty Pies, homebrewers representing the Polish Association of Homebrewers and the Wrocław Brewing Initiative as well as MP Michał Jaros, activist of the craft industry and the author of the initiative “Act on small breweries.”

Some of the problems mentioned by the participants to the discussion included: the fact that legalization of installations by the Office of Weights and Measures is not based on producers’ specifications even if the equipment is produced in the EU; licence costs are the same for small and commercial brewers; licence granting procedures prohibit sales of own products by homebrewers at, among others, trade fairs, festivals and garden parties (in order to obtain a licence for outdoor sales one needs to be granted retail sales licence first). The representatives of the industry were encouraged by the MP to identify the barriers that they came across while establishing their brewing business. It was proposed to compile all acts, ordinances, decisions of authoritative bodies and state institutions that regulate the business operations of mini- breweries. MP Jaros will file a motion with the Sejm’s Office of Analyses to prepare an analysis on legal provisions regulating the brewing market in Czech Republic, England, Belgium, Italy, Scandinavia and Germany (focusing on mini-breweries). More meetings are planned in order to activate the entire community.

The formal answers to the questions and motions put forward by MP Jaros have been distributed: