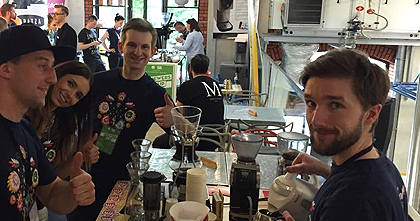 “Dear Ladies and Gentlemen, Browar Stu Mostów has opened its doors to host this year’s edition of the Polish Brewers Cup. We have been thinking about organizing the Cup outside Warsaw for a long time but only after meeting the fantastic team of Browar Stu Mostów have we felt ready to take on that challenge. What we and Browar Stu Mostów have in common is an innovative approach to traditional methods, craft, originality, quality, flavours, diversity, education and promoting beer drinking culture. Great! Just like us, they can also be observed at work. The Brewery’s team has prepared a presentation about beers and brewing methods as well as the traditional Barista Party” – that’s how the Cup was opened.

The Brewers Cup is the most favourite competition among baristas; this year it has attained the rank of the Cup of Poland. The competition involves using alternative methods of coffee brewing such as chemex, ceramic filter, aeropress, siphon, or clove. It’s simply no-pressure coffee . The highest degree of proficiency, the highest quality coffees, a feast for the eyes. The winner will represent our country at the World Brewers Cup that is being organized in Sweden this year.

In the first round (Tuesday 10:00 a.m. – 6:00 p.m.) every competitor brewed the same coffee. The jury evaluated the outcomes in blank tests not knowing who and how brewed it. The points were earned for aroma, flavour, taste, acidity, body and balance.

In the final round (Wednesday 11:00 a.m. -1:00 p.m.) six best participants brewed coffees of their own choice. This time, on top of the previous qualities, the jury also evaluated the way coffee was presented.

The organizers of the 2015 Polish Brewers Cup are a speciality coffee roasting house Kofi Brand and Browar Stu Mostów with the help from: Bero Polska, importer of unroasted coffee; Coffedesk, supplier of coffee brewing equipment and coffee serving accessories including Hario, Bunn and Baratza; and Golden Fruit, the owner of BeanBrothers services, a distributor of, among others, VST refractometers. The Cup took place under the auspices of Speciality Coffee Association of Europe and World Coffee Events.

We like coffee. Our first bartender was one of the best baristas, Michał Matwiejczuk. The news has spread fast. It’s hard to admit it but there are gests visiting our pub just to have their coffee made by Michał M.

Coffee brewed by Michał follows the philosophy of craft beer: thinking outside the box, challenging mindless acceptance of paper-cup happiness (drinking coffee on the run) and appreciating simple pleasures.

The coffees served at Długosza Street are nothing like mass produced products. We don’t want coffee to become the symbol of the fast-moving world where exhausted workers have no time to sit down and drink it. Our coffee is our reference point which allows us to position craft beer and explain its qualities. Coffee and beer are drinks for freedom lovers.

Enjoy the photographs of coffee lovers, participants and winners of the 2015 Brewers Cup of Poland organized for the first time in WRCLW. Source: Browar Stu Mostów, Kofi Brand, michalxsowinski.