“Impressed by the Festival and Browar Stu Mostów” by Tomasz Kopyra 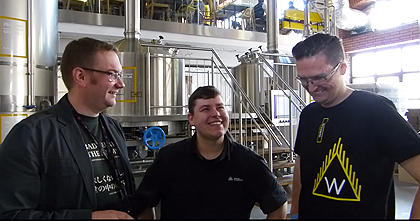 Tomasz Kopyra has invited international bloggers who arrived to WRCLW to take part in the 6th edition of the Good Beer Festival to visit Browar Stu Mostów. His video coverage sums up the story of our brewery: beginning with renovating the historical building through preserving its industrial atmosphere to equipping the brewery with state-of-the-art equipment which allows for brewing the highest quality beer. The brewing process is described in a lightweight manner. Interestingly enough, the brewery is already planning its expansion. Well, it’s a must see!

The expansion plans include all three brands – WRCLW, Salamander and ART as well as the Brewery itself. Half a year following the opening we could actually do with more space. There are several factors that have led to the success. Since we value heritage, we use traditional brewing technology and natural brewing process. However, there is more to craft beer than tradition. We believe that beer shapes our identity. This is the reason why we’re working on reviving the long-established tradition of beer culture in WRCLW and making it part of everyday life. Merging tradition and modernity is the Brewery’s trademark. We’ve preserved the industrial character of the pre-war building. We’ve created a brewery with an open-bar where customers taste beer and watch its production. We give tours and workshops. There is a team of passionate brewers, bartenders, baristas and chefs working for our customers. Our mission is to help people realize the difference between craft and commercial beer.

Our guests have often asked us about the recipe for success and here is what it includes:

High quality – technological solutions used by most prestigious craft breweries worldwide. We are proud of the most innovative equipment that has won the brewery the name of craft Ferrari. It makes an impression even on those who have visited all breweries in Poland and hundreds abroad. What is more, partners and suppliers ensure high quality and constant improvement of standards. Ask if we are going to be technologically better in a year or two, and the answer is “yes, we are!”

The pub with a view. Having no equals in Poland, this size of brewery with an open pub is a unique solution. Whether you stop by to have a beer or two, dine or meet friends, you are at the heart of the brewing process. We’re open every day for lunch cooked by passionate chefs. Absorbing all senses, we are aiming at serving more than beer. We support passionate chefs who, using naturally and locally grown produce, create original dishes pushing our taste experiences to the limit.

Atmosphere – a traditional craft brewery in the centre of Wrocław, which brings together the city’s context, history and its inhabitants. Being part of the well-known factory of hydrometers, the historical building creates the atmosphere of authenticity. The unique interior design gives the opportunity to show production process. As we have meant to focus on education since the very beginning, the designed space allows for organizing convenient tours so that thousands of customers have a chance to experience the difference between craf  beer and mass production. When you see the brewing process with your own eyes, you will never return to the mass-produced commercial beer.

Numerous activities inspired by the brewery and the pub. The Pub has been the meeting spot since the construction works started. This is the place which brings together employees of former breweries from Wrocław, restaurateurs, chefs and local producers (recently the meeting of the Guild of Bakers and Confectioners). We have also hosted befriended craft breweries from Poland and other parts of the world. We have started to promote WRCLW and export our beers to Czech Republic and Germany.

Analysing the road to success, the role of placing the brand and product into a wider cultural context comes to light. What serves as the source of inspiration are organized meetings of artists, designers, and recently architects that show us how much we all have in common. The final effect is achieved thanks to cooperation, talent, and hard work of our brewmaster. As our motto has it: craft is part of creative capital of WRCLW and Poland. And this is the precise answer to the question about the key to our success!

To learn more about the Festival: http://www.tuwroclaw.com/wiadomosci,wroclaw-stal-sie-stolica-dobrego-piwa,wia5-3266- 24247.html

To buy WRCLW Dunkelweizen after the Festival go to: http://100mostow.pl/piwna-mapa/