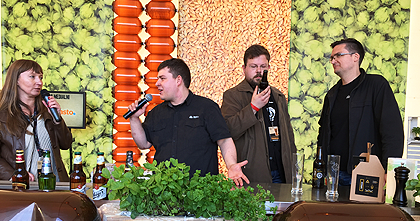 We feel honoured to present the official beer of the 6th edition of the Wrocław Good Beer Festival that you helped to create. In a survey organized by the Good Beer Festival, fans decided that the Festival Beer should be a warm-fermented dark beer brewed from Polish hops only. Following your advice we have selected the style that perfectly combines all these elements – Dunkelweizen.

For years the Bavarian wheat beer has been mostly dark; today, however, there are two styles: Weizen (pale wheat) and Dunkelweizen (dark wheat). The dark wheat beer ideally combines the darker caramel malts and strong warm-fermentation phenols – cloves and bananas. In order to give the beer some balance and high drinkability, high quality hops of noble aromas are needed. The Lubelski hop variety meets these criteria – this hop variety has been grown in Poland since 1964 and till this day is considered as superaromatic. Also appreciated abroad, this variety has a pleasant herbal and floral character often compared to that of the famous Zatecki hops from the Czech Republic. It gives the traditional beer a noble character and pleasant bitterness.

Traditional beers are brewed through the decoction process, which is slightly more complex than mash infusion process. The decoction process is based on separating part of the grist, bringing it to a boil, and then putting it back to the mash tun. In effect, temperature of the entire mash rises quickly. Such a method allows for obtaining caramel fullness of the beer. This traditional German style is quite a challenge as on top of the more complex mashing it also requires high quality raw materials – top-of-the-range wheat malt (at least 50% of the grist), traditional hops and warm-fermentation yeast strains releasing clove phenols and banana esters.

We’ve used as many as 7 malt types to brew the Festival Beer. As the Bavarian tradition has it, over half of the grist is made up of wheat malt; however, the unique taste has been achieved thanks to Munich malt and caramel malts. To achieve the deep dark colour we have added several percent of dark malt at the very end of the mashing process – chocolate wheat malt and colouring malt which account for the subtle taste of nuts and nutmeg.

What matters in the Dunkelweizen style are high quality warm-fermentation yeast strains. Through producing such compounds during the fermentation process as 4-vinylguajacol and isoamyl acetate yeast releases cloves and banana aromas so typical for this style. We have set on the quest to look for perfect fresh yeast strains and found them in a befriended Czech brewery. There we have taken some yeast strains from open fermenting tuns. Even though we have promised not to reveal where the yeast comes from, we’d like to give our warmest thanks to the brewery! The yeasts have done their job!

The beer is slightly cloudy. When poured into a glass, thick beige coloured foam appears. The aroma is dominated by clove and banana flavours along with caramel sensations and the smell of a freshly baked bread. The beer tastes of wheat tampered with pleasant but noble bitterness. There is the somewhat acidic aroma at the finish which accounts for high drinkability and refreshing experience. It is perfect for May, and our Festival.

Wheat beers taste best when fresh. That’s exactly the reason why they are brewed by almost every German and Czech regional brewery. Local beer lovers have an easy access to the freshest wheat beer available. That’s why we wanted to present traditional style that tastes best where it was brewed.