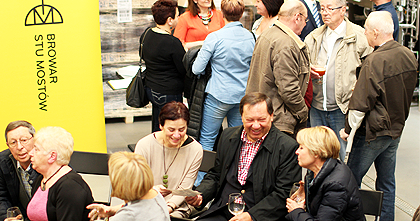 The aim of the gathering was to socialise, share memories of the long-established history of Wrocław breweries as well as remind us that for Wrocław dwellers beer has been an essential part of their everyday life for ages. The key guests of the Reunion of brewmasters were the authors of a cult book “Beer in Wrocław – from Medieval Ages to Contemporary Times” represented by editor Halina Okólska from the History Museum, a branch of the City Museum of Wrocław.

What did we talk about? The brewing heritage of Wrocław; the return and rediscovery of regionalism in contrast to globalisation. The mission of Browar Stu Mostów “to show the difference between craft brewing and mass production” was heard over and over again.

The role of interpersonal relations in creating beer culture today and in the time of prosperity was discussed. Andrzej Wilk, author of “Wrocław Breweries between 1945 and 2002” and “Landmarks of the 19th century brewing industry in Wrocław” presented on competencies and positive attitude of brewmasters from Lwów that moved to Wrocław after the II World War. Refreshing recipes of traditional beers from Wrocław, they were the cutting edge.

Rich social life revolving around the brewery, meeting over beer and food, reviving beer culture were mentioned as incredibly valuable by Krzysztof Popiński, PhD, adjunct at the Department of Philosophy and Economic History, Faculty of Economic Sciences at Wrocław University of Economics, and an expert in social practices of Wrocław breweries at the turn of the 19th and beginning of the 20th century. Many of our guests were impressed with the announcement of a concert under the supervisor of Izabela Jeżowska, Professor at the Academy for Dramatic Arts and Marcin Grabosz, MA, that will take place on March 27.

Our guests reflected on the times when such places where the heart and soul of academic life. Students and professors would gather over beer to debate and develop bonds of friendship. Draftbeer from Silesian breweries was what they mostly drank. Just like yesterday when WRCLW Roggennbier, flagship rye beer by Browar Stu Mostów was served as the beer of the night.

Those who have worked for the beer industry in our city share our enthusiasm over the success of the first Wrocław craft brewery in years. Our first beers have been so successful that they immediately sell out in the best pubs in Poland. The brewery has earned itself the name of craft Ferrari. We are happy to host beer lovers in our pub, from where the production process can be observed, to organize food tastings, workshops and tours guided by our brewmasters – Arletta and Grzegorz Ziemian commented enthusiastically.

Fryderyk Krukowski, a long-term Chairman of Browary Dolnośląskie Piast thanked for the invitation and reunion of the Piast team.