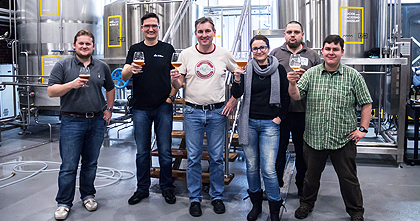 Our seventh beer is the outcome of creative cooperation with brewmasters from CAMBA Bavaria. The recipe for the beer was created jointly but it was brewed in Wrocław. In spite of being a small brewery, CAMBA Bavaria is nevertheless appreciated and recognised globally. On the one hand it is of a typical German character, and on the other it is very unique. Not limiting itself to brewing pils or wheat pils so typical for that region, CAMBA brewery has brewed over 50 styles, often experimenting with beers similar to American or British ale. The beer brewed in Wrocław is the first one created in cooperation with another brewery. The collaboration has definitely opened a new chapter in the rich history of Wrocław-Bavaria relations. It has also provided inspiration to create best quality beers in Wrocław.

The style we have chosen is Doppel Weizenbock IPA, that is a merger between the German school of brewing Weizenbock-type beers and more characteristic hops of the India Pale Ale style. This dark-orange beer takes the best out of both styles: the pleasant banana-clove aroma and strength of double wheat bock and citric fruitiness of IPA released by new-wave varieties of German hops: Hallertau Saphir and Mandarina Bavaria.

We have taken advantage of long-term experience of German brewers in brewing excellent pale and dark wheat beers. Whereas we have added some creativity inspired by the American new-wave breweries. Still, in order to underline the German style, we have decided to use new-wave German hops.

The thing is Wheat Bock is a traditional Bavarian beer that is not often brewed today. But in this version, we have merged the old-fashioned with new-wave beer. And the huge amounts of Bavarian hops do their part, too. Another surprising ingredient is yeast from the Bavarian brewery Wietbier. A few years ago a bottle of the Wietbock beer was found during redecoration of their restaurant. Although the bottle was old, the bear still tasted well. Yeast was still active. That’s how brewmasters created their own brand and own yeast.

Such projects allow for exchange of experiences and experimentation, or even a challenge to do something that is not easily attainable. This is exactly what differs craft beer from mass production. The ingenuity of the final recipe is based on ingredients and commitment of both parties. In terms of international cooperation, the issue at stake is also promoting local scene and WRCLW as the place where beer is brewed.

Such meetings also broaden horizons of everyone who participates in this process. They teach us how to communicate well, voice our ideas or look for compromise. And there are also the invaluable moments when somebody exclaims: “I wouldn’t have thought of it myself!”

The fact that such a strong team of brewmasters from Camba have arrived shows that WRCLW and our country are becoming a more and more important market. The changes that are taking place on the beer market in Poland must have been noticed also abroad.

The ART brand stands for creative cooperation between talented and open-minded people. The brand builds bridges between people and beer styles.

Visit us and have a beer. Cheers! Prost!

The beer and the ART. creative collaboration brand officially premieres on Friday.