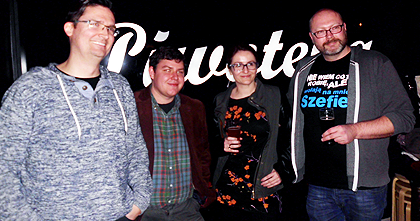 The first multi-tap event in Łódź completed! During this wonderful craft lesson we’ve learned that success of some does not mean failure of others. We’ve been given such a warm welcoming that we hit off it right away: “They’ve caused a stir in Łódź. Such events bring people together; as beer lovers we talked beer only for several hours. Participate in beer events, go to pubs, chat and drink good beer!” reports Adrian Ogłoza from the blog: piwnyrap.pl

For craft and creativity, Łódź is an important city that has always been very tolerant for diverse cultures and religions. It is there that the four cultures – Polish, Jewish German and Russian – co-existed. Since tolerance and open-mindedness are essential features for a 21st city to thrive, multicultural roots of Łódź give the city an advantage in the battle for creative sectors.

We also believe that craft brewing is an essential part of creative capital. As beer is important for our national identity, we should no longer talk about it from the deprecating perspective of socialist Poland or plastic advertisements of the last 20 years. Arriving to M4K from Wrocław – the Meeting Place, we felt at home in Łódź.

Meetings and diversity are the source of inspiration. Similarities do not stir emotions. While two, three or four different viewpoints boost creativity. The same rule applies to beer. Millions and millions of hectolitres of the same beer do not make a difference but a few uncompromising rebels can start a revolution. One craft brewery can change the image of any city. Whereas four of them the entire Poland. Let’s wait for the long-lasting effects of our meeting at Piwoteka Narodowa.