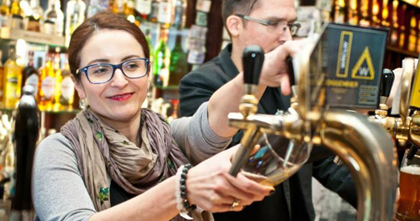 “Beer from a Wrocław-based brewery has won over Poland. And it’s not the Piast brand traditionally associated with Wrocław” says the title in Gazeta Wrocławska daily. There is no denying that we’ve travelled miles and miles to promote WRCLW. It’s important to us. Millions of people should realize that beer has been part of the city’s identity. Beer is for Wrocław what water is for the Mazury region and coal for Silesia. It’s not a coincidence that Wrocław hosts the oldest and the best beer festival and the most important event of Polish craft beer that is without equals, namely: Beer Geek Madness, as well as loads of welcoming pubs and multitaps including Kontynuacja that has been the first pub to open its branch outside the city, in Katowice, a week ago. It’s not a coincidence that new projects and breweries have been opening in Wrocław. Not to mention Spiż – the first dining hall and brewery that has moved Poland into the era of craft beer. That happened in Wrocław in 1992. It’s not a coincidence that this year Wrocław has been called the most important city on the brewing map of Poland.

The roots matter. They are as deep as the history of breweries from Wrocław. The history of beer produced in Wrocław from the Middle Ages to the present day has been documented by the City Museum and Grzegorz Sobel, PhD. The beginnings go back to the One Mile Law, that is the order to build inns within one mile of the city limits where inhabitants would buy beer and food, introduced in 1272 by Prince Henry IV from Wrocław as a supplement to the city’s charter rights. Another document signed by his father Henry III from Wrocław confirms the procedure of hop drying in Wrocław which, in comparison with other regions of Western Europe, was used quite early in beer production. The history has accounted for our incredibly competitive edge.

“In the first half of the 19th century there were several hundred inns serving liquor while just before World War I there was one inn per 1200. 50 inhabitants”; “By the end of the 19th century there were about 70 breweries in Wrocław.” That might have been more than the total number of breweries in all Polish cities mentioned in the article. What a fascinating and sinusoidal history!

After lean years, there has always been a recovery. The last one took place in the 1830s. “Then the tradition of brewing good beer revived as initiated by Wrocław merchants who invited foreign brewers cultivating Czech (pilsner) and Bavarian (wheat) traditions.” In the 20th century the city and its traditions were devastated by wars and commercial production. Even today “Piast wrocławski, the beer brand traditionally associated with Wrocław, is brewed in Brzesk by the Okocim brewery.”

And this is where our history starts. “Browar Stu Mostów was opened exactly 10 years after the closure of Browar Piastowski, the last bastion of beer in Wrocław. Today “Piast wrocławski” is brewed in Brzesk by the Okocim brewery. The honour of our city with a long- established brewing tradition was defended by a dining hall and brewery “Spiż” established in 1992. “Now Browar Stu Mostów has lent its support with six beers launched under the WRCLW and Salamander brands. They are available in Browar Stu Mostów and other pubs offering high quality beer including: Kontynuacja, Szynkarnia and Zakład Usług Piwnych. Salamander and WRCLW are also available in multitaps in Warsaw, Kraków and Katowice and in the near future in Gdańsk, Poznań and Łódź.”

“Even though Browar Stu Mostów has been present on the map of Wrocław for slightly over two months, it has already been gaining in popularity outside the city. Beer aficionados in many Polish cities are enjoying craft beers “that have been well-received and well-reviewed.” We’re constantly showing the difference between craft and commercial beer production: “However, it is not commercial beer that critics and bloggers write about at length. Salamander and WRCLW receive frequent and enthusiastic reviews.”

We’re happy that Gazeta Wrocławska daily has appreciated the development efforts taken by the craft brewing industry that inhabitants of Wrocław are so proud of. We should all remember the roots as they are part of our identity. Our goal is to preserve the nearly 800- year-old heritage of beer production and to mark the presence of WRCLW on the world’s brewing map. Feel invited to visit Browar Stu Mostów to discover the difference between craft and commercial beer production. Find out for yourself why craft brewing has become the symbol of cultural changes worldwide. Come and take the first sip!

Find the article at: http://www.gazetawroclawska.pl/artykul/3728642,piwo-zwroclawskiego-browaru-podbija-polske-i-to-nie-piast-ktory-tylko-kojarzy-sie-z-wroclawiem,id,t.html