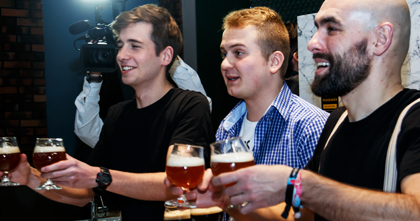 The WRLCW brand has made its debut with rye beer that has quickly made a name for itself as the best rye beer in Poland. This full-bodied warm-fermenting beer is rarely brewed due to a demanding mashing process that requires state-of-the art equipment. Browar Stu Mostów takes a great pride in such a good debut beer. The entire production can be enjoyed at the best pubs in WRCLW and beyond.

Pils is a different story. It’s a challenge since everyone produces it. Take a sip of our pils to get to know the difference between craft and commercial beer. WRCLW PILS is a classic representative of the bottom-fermented German Pilsner (or Pils). The Pilsner malt used in the grist accounts for the beer’s pale colour and a slight cereal hint. The beer’s core is made of quality varieties of German hops, mostly the most aromatic ones, releasing a delicate herbal and spicy scent tempered with subdued bitterness. It’s a perfect beer to celebrate any occasion.

WRLCW has both pils and roggen. The brand’s aim is to strengthen our identity and taste awareness through the minimum number of letters in the name and only the basic ingredients in the product.