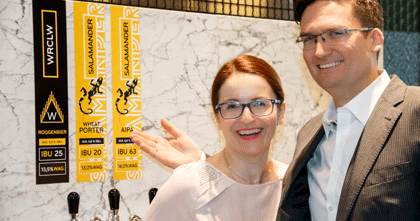 WRCLW Żytnie/Roggen is the first beer of Browar Stu Mostów. The malty richness of this full-bodied warm-fermenting beer has been tempered by an unconventional twist of pleasantly subdued bitterness from the German hop. The full flavour is released by a yeast-based clove hint. Feel invited to take the first sip!

The WRCLW brand will strengthen the identity and taste awareness of the Lower Silesia region. The name consists of consonants only while the product is made of only those ingredients that have been used in beer production for ages. The brand will always be a classic in various editions.

SALAMANDER is the second brand of the brewery created to savour life and as a symbol of a good conversation and company of interesting people. It’s the essence of beer revolution that has made its debut in two beers.

SALAMANDER Wheat Porter is a surprising variation of the British porter. Based on wheat malt, this warm-fermenting beer surprises with its robust malty aroma. Its distinctive features include: velvety smoothness, the smell of chocolate and freshly baked cookies as well subdued bitterness.

SALAMANDER AIPA is our interpretation of the American IPA style and a tribute to hop from overseas. This rich, malty beer with a strong dose of bitterness seduces with its tropical hoppy aroma and scents of warm-fermentation yeast. Let’s make a toast to the grand opening!

The beers making their debut in our brewery combine two approaches to cutting-edge brewing: redefining traditions and following the trend for beer revolution. Be sure that we haven’t taken the soft option. We’ve chosen 6 types of beer styles that differ considerably in order to show, from the very beginning, how rich the beer realm may be. 3 out of 6 beers are already available first in our pub and successively in all good pubs, multitaps and restaurants of Wrocław.