In search of new flavors 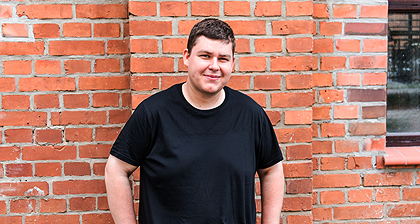 Mateusz Gulej came back from Canada to work at One Hundred Bridges Brewery. He is humble, full of energy and looking forward to the future. Together with another brewer, Grzegorz Ickiewicz (aka Icek), he will soon be brewing beer for you. And boy, this is going to be some beer.

Mateusz had planned to become a biotechnologist, and he would likely be pursuing this career now, if his college syllabus had not included brew making classes. “I got so interested that I began to make beer at the student house”, he recalls. “Each new brew was better than the previous one”. I experimented with malt dosing and tried to figure out the best temperature for fermentation. I was eager to learn more and more bits of knowledge.

During his studies, he worked as a cook, and soon fancied the idea of infusing the world of beer with some of that magnificent diversity of the culinary realm. “Flavors, aromas, great looking dishes: all ofit can serve as a great source of inspiration for the beer making industry”, remarks Mateusz.

To broaden his horizons, he left for Canada. He was the chief and, in fact, the only brewer at a small craft brewery. He became a jack of all trades – from hauling bags of malt, through handling the whole production cycle, to filling cans. “I even designed the labels and worked at the restaurant”, he recalls with a laugh.

In Canada, Mateusz spent much time devising new recipes. He is especially prod of a stout enriched with maple syrup, but his inventions included also new pilsners and pale ales. He tried unusual hop and yeast varieties. He soon found out that he was capable of composing incredibly rich flavors. He wanted to do the same in Poland.

His eagerness was to the immediate liking of the owners of One Hundred Bridges Brewery. It took only a chat over Skype for Mateusz to become the second brew master. “I am not only into the so called new wave beers. Among my interests are also finely crafted traditional variants”, he admits. “There are no such beers in the market, despite their high standing among consumers. Together with Icek, we are pondering over ideas for traditional beers, but with a craft twist and a bit of the new wave feel”.

Icek and Mateusz are a very creative pair of brewers. “Icek is better with technology, while I have more of the craft approach”, says Mateusz. “I blend styles and look for new flavors. We are a perfectly matched team. I am always full of crazy ideas, and Icek is there to get me back to reality”. As for his personal tastes, Mateusz likes pitch dark beers with a strong bitter flavor.