In Wrocław, they long for a top notch brewery 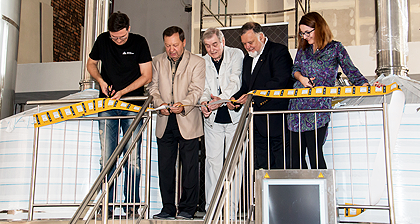 There is a strong sense of community in our industry, say Grzegorz and Arletta Ziemian, the founders of One Hundred Bridges Brewery. This is why they invited employers of former Wrocław based breweries to officially launch the new brewing facility, which serves as the heart of the brewery.

The First Reunion of Former Wrocław Breweries Employees was held on 5 August, on the occasion of the Brewer’s Day. The meeting gathered workers of breweries that discontinued operations due to war, nationalization or globalization. Being members of the trade themselves, people who showed up for the event were genuinely interested in the idea of the city hosting a brewery. They were the first to behold the new production line at the fledgling One Hundred Bridges Brewery. They also launched its central piece, that is the brewing facility.

Dozens of people appeared for the event at Długosza St., representing every stage of beer making, including brewing, maturing, bottling, malting, filtrating, mashing and fermenting, as well as non production departments, such as marketing, human resources and technology. Among them was Fryderyk Krukowski, the longtime CEO of the Piast brewery. Everyone was visibly moved and hoped the best for Arleta and Grzegorz Ziemian.

The fact that a city such as Wrocław does not have a quality brewery is outrageous, exclaimed Leszek Stala, a former head of the Zakrzów brewery. I am truly happy that young people care about the tradition of the craft.

Accompanied by other beer making veterans, Leszek Stala made a tour of the brewing facility and the rest of the production line, expressing admiration in the process. They unanimously declared the whole as state of the art and impressive.

Beer bonds people together, said Grzegorz Ziemian. We receive support from many sources. Aside from Wrocław brewers, we are assisted and encouraged by the University of Environmental and Life Sciences and the Lower Silesia Chamber of Crafts. Through history, beer drinking was a sign of friendship and willingness to share, and has remained so to this day.

The meeting of different generations of brewers proved that the beer making trade is truly special. The event involved people who brewed beer for great lengths of time. They came around to express their support and joy at the prospect of Wrocław having its own beer brand.

I am really looking forward to being able to try a locally made beer, says Czesława Szpunar, a senior brewmaster. Every brewer knows that beer tastes best within 30 kilometers from the brewery.

Beer is among the cornerstones of civilization, it strengthens the ties of society and stands for sharing. When going out for a beer, you are in the company of friends, feeling good and expecting a pleasant evening. The meeting at One Hundred Bridges Brewery showed the truth of these words.