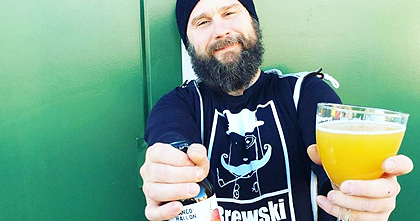 Marcus Hjalmarsson, founder and head brewer of Brewski in southwest Sweden, is full of surprises. Surprise number one came when he launched a full-scale commercial craft brewery with no track record and no experience; a complete unknown to Sweden’s well established beer and brewing community. “I was a beer enthusiast for a number of years, having had my first micro beer experience in Canada in the mid 90s,” says Marcus. “At that time, I asked myself why we didn’t have microbreweries in Sweden. So I’d been thinking about it since I was 19, but I knew I wasn’t interested in brewing at home, so it didn’t really go much further than dreaming; I certainly wasn’t part of anything you’d call a beer ‘community’. “By the time I hit 37, I’d saved a bit of money and my kids had grown up a bit. I’d also read a lot of books on beer chemistry and brewing technique, and felt it was the right time to make things happen.” So that’s precisely what he did. The first beer Marcus ever brewed was on his own commercialscale brewkit. The second surprise is that his beers were really rather good from day one, and Brewski quickly made a name for itself and its distinctive fruit ales. Characteristically though, Marcus dismisses any idea that he was doing anything particularly groundbreaking here, and offers a more humdrum explanation for his style. “A lot of people think that was really clever, but it was really just a coincidence,” he says. “I was angry about the quality of the hops we were getting, so I had to find a solution, something to replace the bad hops with. I thought it was a simple job; I was after a tropical taste and aroma, so why not try the actual fruit? There was no genius at all in that, it was only common sense.” Having come from a background in the food industry, Marcus puts hygiene and technology front-and-centre when discussing Brewski’s success (where many craft breweries would probably say something vague about passion and innovation). “That’s the edge of everything when it comes to food and drink. It’s 100% focused on hygiene, then if we have time left over we can experiment and have a good time. But the most important thing of all is that we brew cleanly. I’m basically a janitor – I’m cleaning all the fucking time. Everybody thinks it’s a luxury thing to be a brewer, but it’s really hard work and you have to be completely scrupulous before you can be creative.” This makes sense once you grasp just how much of a perfectionist Marcus is, though this often manifests itself in surprising ways. Rather than striving for total consistency from brew to brew, he will deliberately tweak recipes during production in search of the perfect formula, meaning each batch of a particular beer will most likely be different.

“I have problems settling down and being satisfied with whatever it is that I’m doing,” he admits. “I’m never satisfied that a beer is good enough, so I’ll always try and improve on it next time. The only brew I’m really satisfied with now is the Mango Fever. The last three batches have been very similar, but that’s after I’ve changed it maybe 60 times. “I don’t think microbreweries should be consistent. Of course in quality we should, but not when it comes to recipes. We need to develop our recipes. Of course, that means people say to me ‘the reason you changed recipes is because you can’t be consistent’. If they want to believe that then fine. If you’re happy the recipe in those first few batches is as good as it’s going to get, then good for you – I just don’t see the point in that.” This is clearly something Marcus feels passionate about, and marks a radically different outlook from most of the craft beer world. So what kind of perfection is he striving for in his beers, and will he ever be sufficiently satisfied to stop tweaking and prove the doubters wrong? “Sometimes, when you taste a beer you can feel the brewer in there – it’s laying-on-hands work,” he explains. “Now I can say Mango Fever is a signature, it’s an expression of myself. My personality is in that beer. And I can’t really say that about the other beers I’m making; they’re great, but they’re not finished yet.” One thing that will come as no surprise is that Marcus has no plans to take a back-seat as the brewery grows, and is determined to keep brewing day-to-day, dismissing “master brewers who no longer want to sweat”. “I could easily walk away from my brewery today and live on it, but I refuse to give my position as head brewer away. If I did that, it would become somebody else’s brewery, even if I still owned it. There’s still a lot of work to do, and I never leave a job half-finished.”